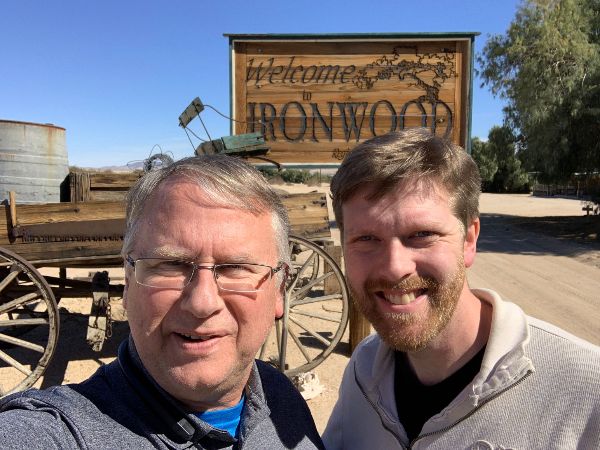 We have big news to announce to all our campers and their families. This news is both exciting and bittersweet, but we trust it is the Lord’s leading and it will be the beginning of an incredible new chapter in the history of Camp Infinity.

Here’s the big news: Dan Wooster, the founder of Ci and the director for the past five years, has made the very difficult decision to step down as director. Living in Greenville, South Carolina, while directing a camp in Northern Kentucky, as well as hosting mobile and mini camps around the country, has demanded hundreds of hours of Dan’s time (much of which has been spent in a car!). He has loved directing Ci—and has done an amazing job—but is looking forward to spending time with his wife and growing number of grandchildren. Dan will still be involved with the camp but has handed his directing duties over to our interim director, Ben Torkelson.

Before we introduce Ben to everyone, we here at Ci want to stop and thank Dan for the incredible sacrifices he has made to build Ci to what it is today. His passion for young people, STEM, and God’s Word and the gospel is unmistakable. He has guided Ci for the past five years with such dedication and passion, winning the hearts of parents and supporters along the way. He will be greatly missed by all this summer.

Now, to introduce you to Ben. He was born and raised in Alaska and spent much of his growing up years attending Christian camps, including counseling at Solid Rock Bible Camp in 1997. He eventually went into construction and in 2014 moved to Northern Kentucky and helped build the Ark Encounter (the incredible story of how he began working on the full-size Noah’s ark is featured here in this newsletter).

Ben has been working with Camp Infinity for the past three years as our camper chaplain, as well as a tour guide at the Ark. He is passionate about preaching and seeing young people grow in faith and love. He also loves using technology to reveal God’s brilliance and creativity. Ben is married to Jenny and has 10 wonderful children, ages six months through 12 years.

Please join with us this summer in welcoming Ben as the interim director.

God has blessed Ci with an amazing group of donors who love what we do and how we do it. Recognizing that the cost of a Ci summer camp experience is higher than the typical Bible camp experience, but less than typical STEM camps, we offer scholarship discounts to those who qualify. For more details just send us an email and share a little bit about your child's interest in STEM from a biblical worldview.

Jason is the social media manager for Camp Infinity. He loves helping us tell the stories of Ci through the digital mediums of Facebook, Twitter and Instagram.

Dr. Jeremy Ervin is the Inaugural Dean of the School of Education at Cedarville University. With his experience in providing professional learning for K-12 teachers and his time teaching pedagogy in higher education, he recognizes how the 21st Century classroom needs to center on the engagement of the learner with enduring understandings.

Max Lorentz has loved science (and astronomy in particular) since childhood. He enjoys sharing it with others, especially with young people. He studied mathematics as an undergraduate and is currently completing a Ph.D. in astronomy.

RJ is a blog writer for Camp Infinity and a student at Bob Jones University majoring in engineering. He loves considering the science and technology claims of science fiction stories. He also loves reading. Throughout his life he has been a dreamer, imagining a never ending series of what ifs and maybes. From a young age, God gave him a passion for learning all he could about the world around him.

If you or your organization would like to help sponsor scholarships for Camp Infinity, use the secure button.